Svilen Nikolov was born in Varna. He finished “Dobri Hristov” National School of the Arts in two majors – violin and opera singing.

In 2002 he got a Master’s Degree from the State Music Academy in Sofia.

He graduated in opera singing in the class of Associate Prof. Konstantsa Vachkova. He was a prize-winner at the Seventh “Hopes, Talents, Masters” International Competition Festival in Albena and the First “Katya Popova” National Competition for Young Opera Singers in Pleven (2003). 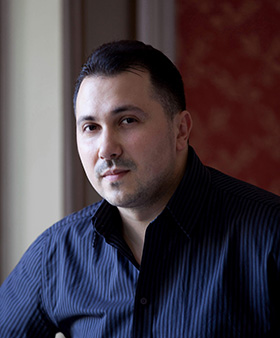 One of his first roles was Papageno in The Magic Flute by Mozart. Since 2004 he has been soloist with the Varna State Opera.

His repertoire includes the roles of Giorgio Germont in La traviata and Rodrigo in Don Carlos by Giuseppe Verdi, Masetto in Don Giovanni by Mozart, Belcore in L’elisir d’amore and Lord Ashton in Lucia di Lammermoor by Gaetano Donizetti and others.

He has guest-performed in concerts and spectacles on prestigious stages in Bulgaria, Austria, Germany, Spain, France, South Korea, China, Cyprus, Denmark, the Netherlands and the United Arab Emirates.