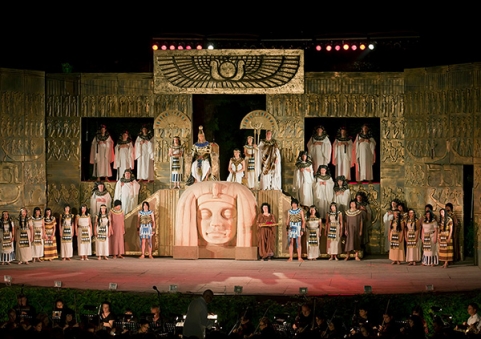 Aida – Verdi’s most spectacular masterpiece, captivates audiences with its monumental scenes, interpreting themes that have defined the composer’s lifework: struggle for independence , aspirations for freedom, great devotion, and the power of love. The expressive melodiousness and psychologism of Aida’s arias and the festive magnificence of marches in the choral parts, leave the strong impression of Verdi’s music in the hearts and minds of generations of opera lovers. Aida’s production history in Varna is closely connected with the Summer Theatre, it was the first show to bless its stage in the distant 1957, and to open the first then restored Bulgarian festival after the wars, entitled Varna Summer International Music Festival

Svetoslav Borisov, Conductor -- until recently the Chef Conductor of the State Opera of Varna, now working in Magdeburg, where he also conducts Aida. In the leads, we are going to see some of the best soloists of the Varna opera – Gabriela Georgieva is playing Aida, and Valeriy Georgiev – Radames.